Lee John Phillips is a Welsh artist, who grew up in Aberbargoed. With Aberbargoed being a small mining town, everyone lived close together meaning that Phillips lived on the same street as his grandparents, who he was very close to. Sadly, when Phillips was just fourteen years old his grandfather, Handel Jones passed away. Even in his thirties Lee Phillips still remembers the tragic event vividly. Phillips states, “He was a quiet and gentle man. He had a passion for collecting tools, salvaging and fixing everything he could.” [Lee John Phillips, https://www.buzzmag.co.uk/shed-project-interview-lee-john-phillips/%5D.

For his drawing process Phillips came up with four rules:

However, with Phillips using these rules the number of drawings grew from fifty to seven thousand five hundred, due to the fact that Phillips is only around halfway through his findings he suspects that there is still around a hundred thousand drawings still left to complete. Although exciting the strain of repeating the same items over and over again with the many items he finds, has caused Lee Phillips to need physiotherapy sessions on his hands. Not only is this process physically hard it is also mentally and emotionally difficult for Phillips, with some of the items having Jones’ handwriting on them causing him some heartache. 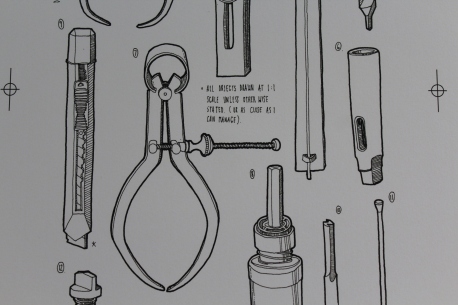 Part of “The Shed Project” by Lee John Phillips.

I really like this idea, as avid user and creator of lists, this appeals to me. Not only is it great for recording what you own with a physical image of it, but it also lets the viewer into the creator’s life. I find Lee Phillips “The Shed Project” quite intimate in the sense that the items shown, although they look like ordinary items that may not be of any particular interest, they tell you a story about his life and the life he had when his grandfather was alive. It also shows a lot of determination and dedication to Phillips grandfather’s passion, to draw everything and not give up, even if he has already drawn one item several times as that is how many are in the shed. I hope to allow the viewer into my life and give a sense of personal voice to my parallel project as Lee John Phillips has.